Ana Olivia Roberts was born at Kennestone Hospital in Marietta, GA on March 25, 1998. She was a beautiful girl, full of life and love. Olivia had many strengths. She had a reputation for being a faithful friend, having a positive outlook on herself and others, having a good time, and being a great dancer. Olivia was an amazing daughter, granddaughter, niece, cousin, soccer team manager, and friend. She was a remarkable young woman, beautiful inside and out, full of character and compassion.

Her life was cut short at age 18 by a tragic accident on August 3rd, 2016, just before she headed off to college. She was mourned by those who knew and loved her; friends and family from all over north Georgia and the Southeast, all the way to La Paz, Bolivia, where she had done two mission trips to help the poor. In her honor the B-Olivia Library was founded with a mission to increase literacy among the poor of Bolivia.

Olivia was active in church and had a favorite scripture from the book of Ecclesiastes:

I know that there is nothing better for people than to be happy and to do good while they live. That each of them may eat and drink, and find satisfaction in all their toil—this is the gift of God. (Ecclesiastes 3:12-13)

Olivia’s impact she had on others was exhibited in the 750 people who attended her memorial service. 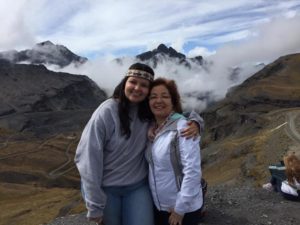 Olivia with her mother Beda at El Alto, in Bolivia

Olivia first went to La Paz, Bolivia when she was 16. She has just finished her sophomore year of high school, and she was chosen to go with 7 other teens from our church along with 4 chaperones, one of whom was my wife Beda. Bolivia remains the poorest country in South America. Its capital La Paz is an amazing and unique city nestled in the Andes mountains 12,000 feet about sea level. With the altitude and poverty, La Paz is a difficult trip, but it sure is a special place, with beautiful people.

Olivia’s first mission trip to Bolivia included a visit to a family who lived in extreme poverty in a shack on top of a hill. The single mother had several children, and Olivia attached herself to the most challenging child; one who had endured many difficulties. That was just part of who she was. Seven months later, she decided to go to Managua, Nicaragua, where she did the summer camp there serving local children. She thought her time in Bolivia was done, since no teen had been chosen to go more than once, but as God would have it, she was chosen again. She raised her money as she finished high school, and there she was back in Bolivia serving the poor just 2 months before she died. Back with a new set of teens and back with Beda again. Back serving and reading and playing with the Bolivian children, including the most difficult ones.

A couple days after the accident, our minister wakes up and says “Be Olivia”, as in “B-Olivia”, as in “what a way to honor the memory of our Olivia than to start a new program in Bolivia in her honor.” The Broyles announced launch of the B-Olivia Library during her memorial service to the surprise of everyone there.

We are extremely grateful for everyone who has contributed to making the B-Olivia Library a reality as a way to honor the memory of Ana Olivia Roberts.